President Kimberly Marie Jack opened the meeting with the joy of being able to see so many members again, about 70 members, but it was almost hard to recognize them without their masks!

Canon Dart led us with a prayer asking God to watch over us Kiwanis Members as well as all those fighting the major fires going on across our state.

Ted Dimon led us with the patriotic song of “God, Bless America”, not “Home on the Range” as proposed by Geno…

Chuck Maranto, who has been working very hard on the new parking lot at the Marketplace, provided us with an encouraging update on the status of the permitting process through Cave Creek. He reported that we had to provide Cave Creek with some additional drawings from an engineering firm, and that those drawings had been successfully submitted for review. We are awaiting now a response from Cave Creek permitting department.

In observation of the coming 4th of July Holiday, Ted Dimon provided us with an excellent lesson on the Declaration of Independence, calling out with great details the extreme sacrifices most of the 56 signers of the document experienced after their “treasonous” signing. Many lost their homes, fortunes, and families, as well as many of their lives. Ted illustrated how many compromises in the document they were forced to make to make it acceptable to all with long discussions under the hot summer heat of Philadelphia in a closed up building with little or no air circulation and being plagued by horse flies in those hot clothes and wigs of the day. Ted urged us all to take out a copy of the Declaration of Independence and re-read it for the beautiful language which most of us have not experienced since we took Civics in grade school.

President Kimberly then provided the membership with notice that we are in the process of upgrading our Articles of Incorporation for both the Club and Foundation; once we receive Board approval, it will be brought to the membership for a vote of approval. Most likely it will be in July.

President Kimberly then introduced our newly named Executive Director, and current General Manger of the Marketplace, Sandra Carrier, who provide us with more good news on the status of the revenue / sales and numbers of volunteers at the Marketplace. The entire group of attendees then posed with Sandra for a group shot to congratulate her on her promotion just before adjournment. 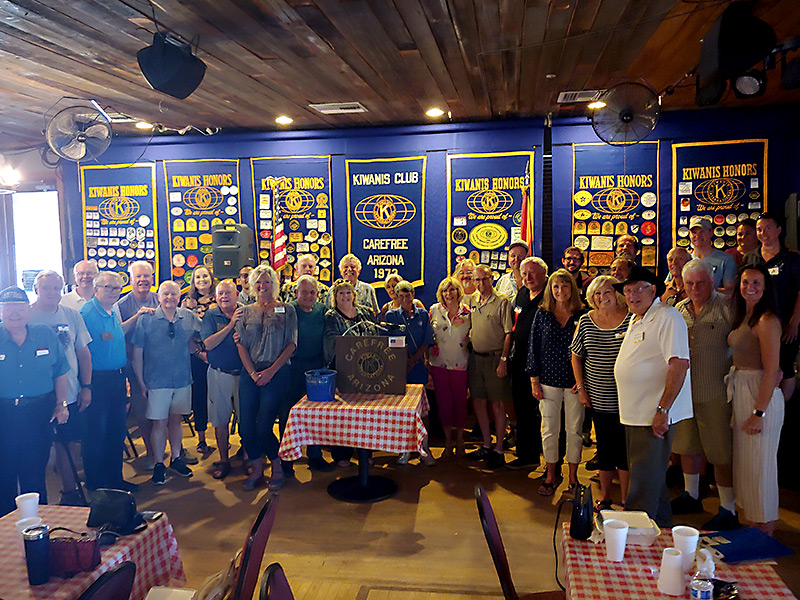