At the annual meeting we will hold our annual election of board members for both the club and foundation. Your attendance at this meeting is very important (and we are serving prime rib for lunch and we have a great comedian for the entertainment, no joke!)

AND THE NOMINATIONS ARE …

Only members in good standing are eligible to vote.

Close
SIGN UP TO GET OUR NEWSLETTER BY EMAIL 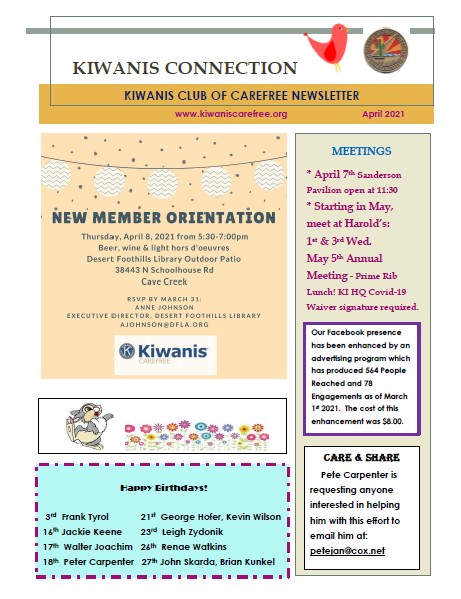 More About Kiwanis Club of Carefree

The Kiwanis Marketplace Staff and Hospitality Committee sponsored a wonderful “Western Night” recognition event for all of the Marketplace volunteers who devote so [...]

The Lone Mountain Elementary was presented with there official charter of there K-Kids Club on 4/15/2021. Kellie Hale - Teacher Advisor for K-Kids [...]

Kiwanis “For The Kids” Banners

Kiwanis “For The Kids” BannersKiwanis is celebrating a “Banner Year” by placing our Kiwanis “for the kids” banners in three locations in Cave Creek [...]