President Elect Joyce Jordan welcomed all to this important March 30,2022, Annual Kiwanis Meeting for the election of officers and new Board of Directors.  She introduced Alexis Sterling Popovich who presented the candidates selected by the Nominations Committee. Bio’s were available at each table for each of the candidates.  She also asked for any nominations from the floor for each position.  There were none.  Ballots had been distributed at the door after checking for membership in good standing status.  The Ballots were then collected and were counted.

Pete Carpenter made a motion to accept both  Club and Foundation slate approved by ACCLAMATION.  Canon Dart seconded the motion and approval was made by members attending by acclamation vote.  The Ballots were counted for the record.

NOTE: At their first Board meeting held on 4/1/22, the Foundation Board of Directors unanimously voted: 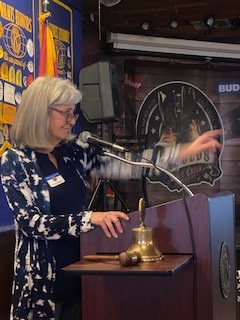