On Wednesday August 4th, school bells rang for the first day of the 2021-2022 school year, but that did not stop Cave Creek Unified School District Superintendent, Dr. Cort Monroe, from sharing some exciting news at the Kiwanis meeting.  Dr. Monroe tag-teamed with Mrs. Marcie Rodriguez, CCUSD Chief Financial Officer, to bring the club up to date on the status of CCUSD, the upcoming school bond, and shared a sneak preview of the new banners commemorating the CCUSD relationship with Kiwanis. The district’s motto is “Inspire Excellence” and Dr. Monroe is doing that, starting with his commitment to patriotism. When he shared that each day starts with the Pledge of Allegiance and each student in grades four (4) through six (6) recites the following passage from the Declaration of Independence: “We hold these truths to be self-evident, that all men are created equal, that they are endowed by their creator with certain unalienable rights, that among these are life, liberty and the pursuit of happiness.  That to secure these rights, governments are instituted among men, deriving their just powers from the consent of the governed…” the room erupted into applause.  A Flag Project is also being instituted, where on patriotic holidays, all the district’s school streets will be lined with the Stars and Stripes. Another hearty round of applause followed his announcement that critical race theory will not be taught in CCUSD.

Also, during the meeting, attended by 46 members and 5 guests, Ted Dimon told yet another “true story” accompanied by chuckles from the crowd. Steve Morse introduced 3 new members; Scott Marine, Don Balascak and Patricia Carter.  The progressive 50-50 pot, at $99, was donated back to the club from the winner so next meeting it will be even larger!  You can see more exciting upcoming events on their website:  KiwanisCarefree.org. 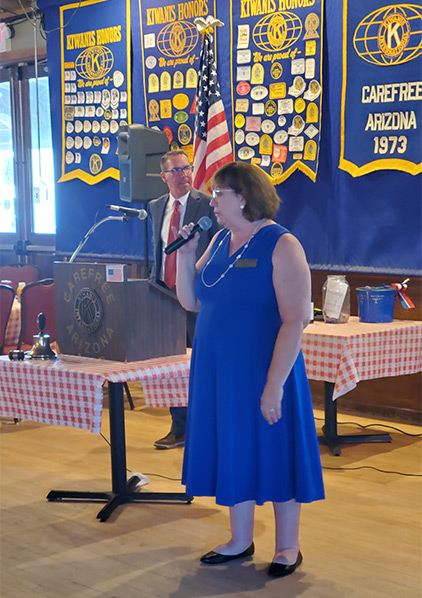